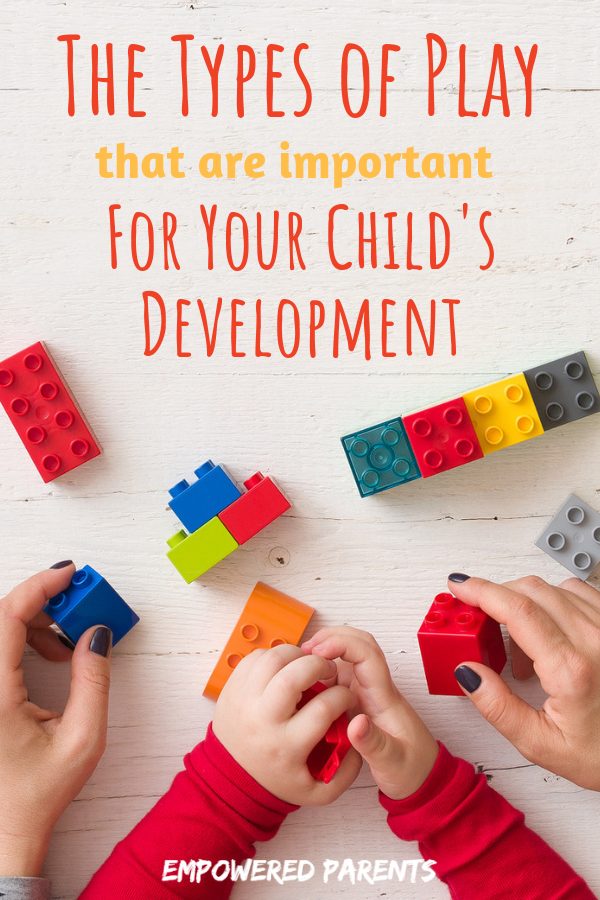 What is play and why are the different types of play and stages so important for a child’s overall development?

Play is the medium through which children explore and experience their world.

For a child, playing and learning are the same thing. Everything kids learn in the preschool years, they learn through play.

Some characteristics of play:

Children learn to understand the world and how it works through play. Their experience of reality is reflected through play.

During play children are:

How Many Types of Play are There?

What are the characteristics and types of play in children?

It is difficult to say the exact number as there are many types of play that have been identified by various child development theorists.

A distinction can be made, however, between stages of play and types of play.

The stages of play are based on the level of social interaction during play (such as solitary or social play) or on the main characteristic of play (such as symbolic play or play that involves games with rules).

The types of play are based on the specific type of activity involved such as language play or constructive play).

There are roughly 3-5 general stages of play that have been identified, but many more types of play. These are all explained below.

All types of play are important and, although children progress naturally through stages, they tend to add and integrate some types of play, rather than stop one type and start a new type.

Types of Play in Early Childhood

Here is an overview of all the stages and types of play in child development, according to the theorists.

During the first stage, known as solitary play (or non-social play), children play with toys on their own and do not notice or concern themselves with other children or what they are doing.

When children engage in parallel play (Parten’s second stage of play), they may play with similar toys such as building blocks, but they are playing next to each other rather than together.

They are not interacting but are happy to be playing near another child.

Children also engage in onlooker play, where they watch the other child play but do not join in or play themselves.

During associative play (Parten’s third stage of play), a pair or small group of children play together, but with little cooperation and negotiation.

They share toys but are each playing their own game and not working towards a shared goal.

Cooperative play (Parten’s fourth stage of play) may include a game with rules or a shared goal, such as building a tower together. Children plan, negotiate and assign roles as they play.

Practice play is about exploring materials and toys to “see what they do.” It involves simple, repetitive movements, sometimes also without toys.

Some theorists also refer to unoccupied play, which tends to be comprised of random movements without a clear purpose, although it is still a part of play.

Piaget’s second stage of play, called Symbolic play, is when children use an object, action or idea to represent something.

They could use a block, for example, to pretend they are on a telephone call.

The last stage of play according to Piaget is more structured and requires following rules and norms to reach a goal when playing alone or with a group.

Smilansky described constructive play as the stage in which children manipulate objects in order to create something.

Examples would be stacking blocks, building a fort or making a machine with cardboard boxes.

The following types of play were noted by various theorists, depending on the angle from which they studied play. These categories are based on the characteristics of the play or on how they develop the child.

This is the rhythmic repeating of sounds or words. Young children do it purely for enjoyment and often use exaggerated body movements.

This kind of play involves making up nonsense words and rhyming words. It starts before a child learns to converse.

Also known as pretend play, dramatic play or make-believe play, this is the highest form of play and involves “acting out” ideas using objects and carrying out roles.

An example of fantasy/pretend play would be dressing up and pretending to be firemen or playing shop.

Symbolic play, where objects are used to represent things, is also a type of fantasy play.

Babies, for example, want to touch everything or place objects in their mouths.

At this stage, the child wants to see what happens when materials are manipulated. An example would be moving on from tasting blocks to stacking them (as they move through the stages of block play) and seeing what happens.

This refers to games with rules and rituals. Children’s play becomes more structured at this stage and may involve multiple players.

This refers to play that is purely physical in nature, such as skipping, climbing a jungle gym or riding a tricycle.

Expressive play is about creating art, music or even writing to express one’s creativity.

Why is Play Important for Your Child’s Development?

The role of parenting is to set the stage for your child’s holistic development. The best way to do this is to encourage and make opportunities for regular play.

Play develops the whole child. There are four main areas of development:

Through play, each of these areas are stimulated and developed right from birth and through the early childhood years.

Here is an overview of how your child grows and develops through play.

Physical activity is important for developing motor skills and when a child plays it is often physical. Play develops a child’s sensorimotor skills and allows a release of energy too. The following areas are developed through play:

Play is responsible for building a child’s intellectual ability. Through play children learn:

Emotional development is as important as physical or intellectual development. Children gain emotional intelligence through play and learn about themselves and their feelings. Play usually is a positive experience, through which a child learns:

Play is a social activity and the main way children pick up social skills and learn to interact with their parents, families and peers. Children learn about:

Examples of Play During the First 9 Years

Here is a brief table showing typical play during the various stages of childhood. They are rough guidelines and may vary slightly from child to child.

Parents’ and Teachers’ Role in Play

Often, an adult’s role in children’s playtime is just to be present. At other times, it is to intervene and provide opportunities or support learning through play.

When young toddlers play they will often feel more secure knowing their parent is nearby. As they grow older, they will rely on a teacher’s presence at school and later on will not need this security anymore.

Here are some tips for parents on how they can best support their child through play:

How You Can Teach Your Preschooler through Play

The wonderful thing about play is you can be engaged in any play activity whatsoever and your child will be learning multiple skills. For example:

If your child is already attending preschool, the time they are at home with you is still a time of major learning. Children don’t stop learning when they get home.

You can take advantage of that fact.

Hi, Tanja you are really amazing. Please send something about child assessment

Hi Ayesha, thank you. Here is an article that may be helpful: https://empoweredparents.co/school-readiness-checklist/