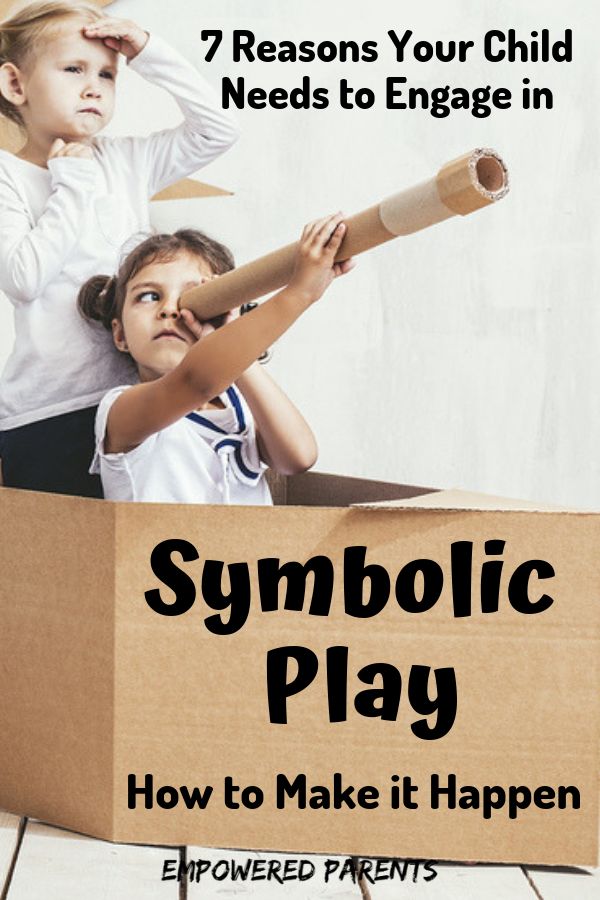 Symbolic play is an important milestone in young children’s play. It is a natural process that is crucial for a child’s healthy development.

Here is what every parent should know about this kind of play and how you can foster it at home and watch the fascinating process unfold before your eyes.

What is Symbolic Play?

Symbolic play is a type of play that young children engage in, where they use an object or toy to represent something else.

By definition, symbolic play involves “pretend playing” with objects or toys that are symbols representing other objects that the child needs as part of the pretend scenario.

An example of symbolic play is a block that “becomes” the phone used to call the fire brigade.

Symbolic play toys can, therefore, take the form of any kind of object, toy or waste material. The only limit to what can be used is a child’s imagination.

What is the Difference Between Symbolic Play and Pretend Play?

Functional play is pre-symbolic and refers to a child using an object appropriately and in a conventional way. [source]

Most agree that symbolic play is when there is clearly an object standing in for another object. It also applies when a child pretends that an absent object is present (e.g. pretending to hold a phone but holding nothing). [source]

When Does Symbolic Play Emerge?

Functional, or pre-symbolic play, usually begins to emerge late in the first year of life, between 8 and 11 months of age.

The first stage of symbolic play in children then begins at around 11-12 months. It becomes more involved and advanced from the age of two. [source]

Here is a brief outline of each phase.

The Sensorimotor Period (from birth)

The child moves from reflex actions to practical actions, using the senses and motor functions (movement). They have some control over their environment.

The Pre-Operational Period (from 2 years)

In this phase, the child develops the ability to represent things mentally or symbolically. This is when symbolic play and drawings emerge.

The Concrete Operational Phase (from 7 years)

The child develops a coherent cognitive system and is capable of thought processes that are reversible.

Children are able to perceive categories, classifications and hierarchies in groups. Thinking is limited to real and concrete things.

The Formal Operational Phase (from 11 years)

The child can execute formal thought processes, such as thinking in an abstract or logical way and making deductions. Children can understand possibilities and hypotheses. Thinking is no longer tied to concrete things.

As you can see, toddlers and preschoolers are in the pre-operational period and therefore learn through symbolic play.

Here is a video explaining the stages, with lots of real-life examples so you can clearly see how your child’s thinking develops.

Why is Symbolic Play Important?

There are many benefits of symbolic play in early childhood. During symbolic play, children develop numerous skills and grow in different areas.

Aside from the cognitive processes mentioned above, here are 7 more symbolic play benefits and reasons your child should engage in this play often.

During play, children develop their fine and gross motor skills by using their bodies and movement.

Problem solving is a skill that is continuously worked on during all types of play.

In symbolic play, every time children are looking for an object that will work as a symbol, or looking at a specific object and deciding what it could represent, they are solving small problems and learning to find solutions.

Language development is an area that has been closely linked to symbolic play.

Here is a study that delves deep into the relationship between language and symbolic play and how important it is for a child who is learning to speak and use language.

Children use imaginative play to express their feelings and emotional needs and act out their experiences of the world.

It is a very healthy and necessary process for them and is how they make sense of the world they are discovering.

Creativity is a skill that can be fostered in a child from a young age.

During pretend play, children rely on their imagination and thus build their creativity and their ability to think in new ways.

During all forms of play, children practise engaging with others, as well as acting out interactions (even during solitary play). Therefore, they are building their social skills.

As explained in this video, “Symbolic play is a precursor for literacy and numeracy. When we write letters and numbers they are symbols for what we are trying to convey. When children are engaged in symbolic play, they are working through the same concept.”

It is very simple and uncomplicated to provide materials for symbolic play since you will not really need to buy anything, but rather make use of items around you.

As long as your children are using equipment and objects in an unconventional way, you will know they are engaging in symbolic play.

It is also not necessary to plan specific symbolic play activities for toddlers and preschoolers, but rather to make materials available, thus inviting children to engage in their own symbolic play and games.

When a child has conventional equipment, such as a mini wooden iron and ironing board, they are using the objects for their intended purposes. This is functional play, but not symbolic.

If, however, they place a wooden board on a table and use a rectangular block to pretend to iron, they are making imaginative substitutions. This is highly creative play.

All you need to do is make unstructured equipment available (open-ended resources). The more unstructured it is, the more imagination your child will use when playing with it.

This is because the more something looks like something specific, the more it will be used for that particular purpose, limiting the use of imagination.

Therefore, the best objects are things like boxes, crates, wooden planks and blocks of all shapes and sizes.

Lara also mentions in this video that natural resources such as sticks, stones, bark and pieces of wood are great for stimulating symbolic play.

What are the Other Types of Play?

Symbolic play is just one of many types of play that are important for your child’s overall development. Other types include:

Each type of play builds your child’s skills in a unique way but all are equally important.

The easiest way to provide holistic play experiences is to let your child have loads of time for free play at home.

I hope you’ve enjoyed reading about symbolic play and its importance!

Thank you for this informative article Tanja! I remember pretending to do ironing as a child but my kids never have. That being because ironing as child was so much more enjoyable than doing it as an adult so my kids have only seen an iron once (maybe twice).

Ha ha! My toddler wakes up and goes to the broom cupboard every morning and just wants to dust and sweep. I wonder how long that will last? To them, everyday chores are as fun as any other kind of play!