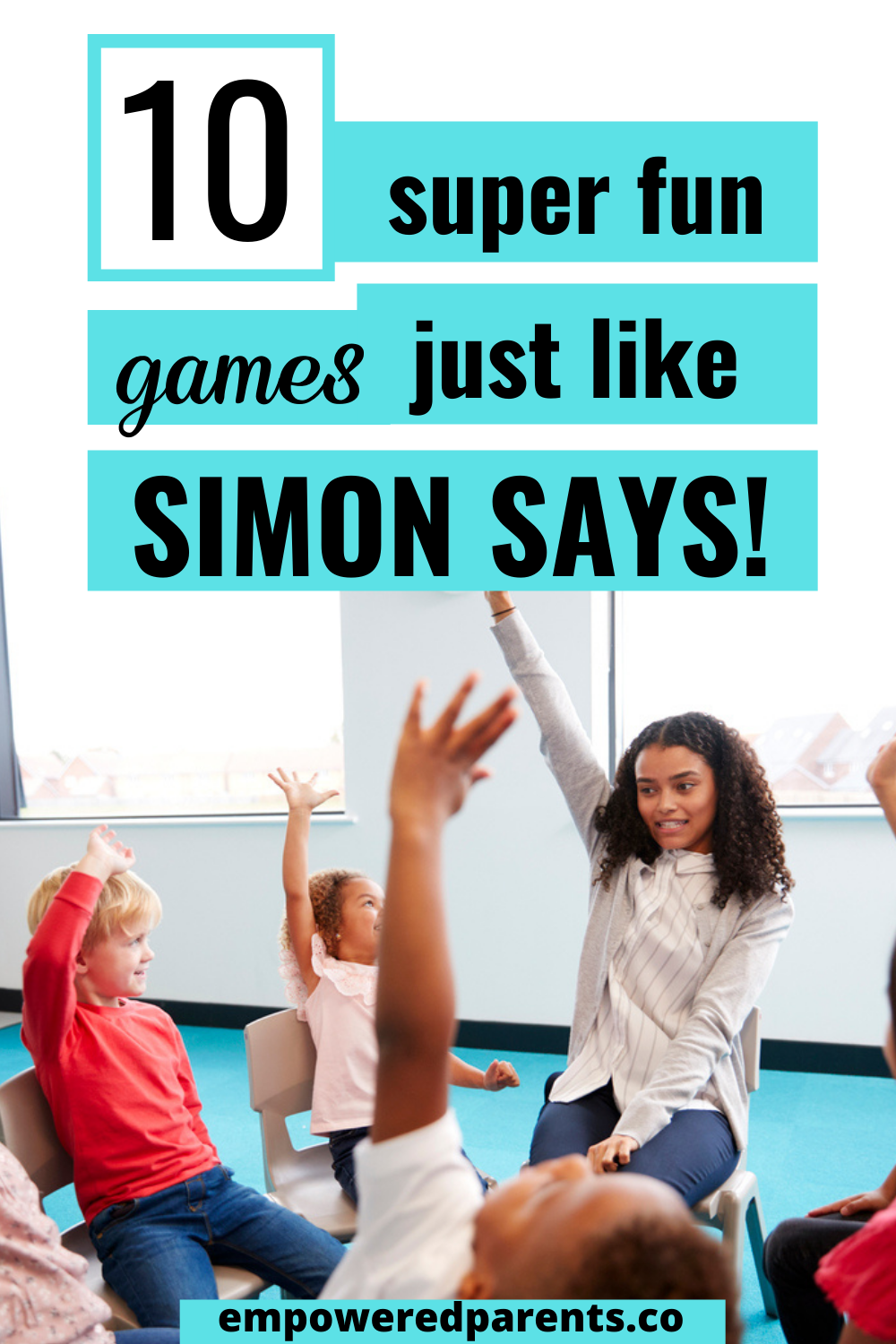 Simon Says is one of those easy, fun games you can play anywhere and on the spur of the moment.

It can help settle restless children, keep them entertained while waiting, or just be played for fun. It’s great for transitioning between activities.

Here are some games like Simon Says and variations that are also great for teaching listening and getting kids to focus.

Some are variations of the classic game and others are different games but with a similar style.

They are good games to play while waiting in line and they also make fun carpet games.

Do This, Do That is a very similar game to Simon Says. It follows almost the same rules (here’s a refresher of how to play Simon Says).

In this version, the person who is “on” must call out action commands beginning with either “do this’ or “do that”.

Anyone who follows the action is out.

This game is wonderful for getting kids to pay attention and listen carefully.

For ideas, use this Simon Says list of commands to play Do this, Do That.

In the River, On the Bank is a fun and simple game to play.

What makes it similar to Simon Says is that it is also a game of listening to the instruction and interpreting what to do and how to react.

In this game, mark out an area using rope or tape that can serve as a river (or stand along a pavement).

Kids must listen to the instruction and do the opposite.

If you say “on the bank” kids must jump into the ‘river’ and if you say “in the river” kids must hop back up onto the bank.

This game seems very simple but it requires a great deal of processing and remembering the rules. It’ll develop strong working memory!

Follow the Leader is a great movement game to get those muscles working.

Kids must still follow actions but they don’t have to listen and decide if they must follow them, as in Simon Says.

The leader moves around, performing whatever actions he can think of, and the group must follow behind, copying the actions.

This can also be played on the carpet or while waiting in line but is more fun if the leader can walk off and get the whole group to follow along.

This is another fun game for preschoolers that teaches visual memory and sequencing.

Instead of giving single action commands, in this game, the leader must carry out a sequence of actions and see if the group can copy them all, in the correct sequence.

Anyone who gets it wrong is out.

Vary the number of actions according to the age of the children. Younger children should start with only two or three actions.

The Telephone Game is not an action-based game, however, it requires good listening and is also the perfect game to play while waiting, transitioning or on the carpet.

The rules of Telephone are simple.

Kids sit in a circle or stand in a line.

The first child (or the adult) thinks of a small phrase and whispers it into the next person’s ear. The message must then be passed from person to person without becoming distorted.

The last child calls out the message and the first child confirms whether the message is correct (it seldom is) and the round usually ends in a fit of laughter.

Here are 100 Telephone Game phrases to get started.

This clapping game can be played with the same rules as Simon Says, using clapping rhythms instead of regular actions.

The child who is “on” must start each round by saying “Simon says” and then clapping out a simple rhythm.

For some rounds, the child must not begin the command with “Simon says” and then anyone who follows the clapping pattern is out.

This will teach listening and concentration and also build auditory perception.

Playing the Categories Game is the perfect way to keep kids busy while waiting in line, and it also builds concentration and vocabulary.

Simply pick a category and go along the line or around the circle giving each child a turn to add a word to the list that fits into the category.

They must take care not to repeat a word that has already been added to the list.

Try these other vocabulary-building games too.

The Wink Murder Game is a quiet game that’s excellent for building observational skills and it develops attention span in the same way the Simon Says game does.

To play this game, the teacher or parent must choose a detective and everyone must sit in a circle with their eyes closed.

The teacher must go around the group and tap one person on the head. That person is the “murderer”.

Everyone must open their eyes and the detective must carefully watch everyone as the murderer gets to work “murdering” people by winking at them.

If someone winks at you, you must immediately lie down (as if you’ve been killed).

The detective wins the round if he/she can spot the murderer before everyone has been killed.

This game is more suited to older children who have more patience (and can be subtle).

Silent Simon Says can be played in the same way as the regular version, except that the actions should be demonstrated and not called aloud.

For example, the player who is “on” calls out “Simon Says” and then shows the action of folding arms.

For other actions, the caller must just demonstrate an action without saying “Simon says” and anyone who copies it is out.

This final game is perfect for teaching listening, thinking and focus. It also makes a good carpet or waiting game.

One child (or adult) chooses an item in the room or area and has to describe it for others to guess.

Example: “I spy with my little eye something that switches on and off, and helps me see in the dark.”

You can teach many skills with a simple game of I Spy.

I hope you’ll enjoy trying these ten games similar to Simon Says that are all quick, prep-free and highly educational.