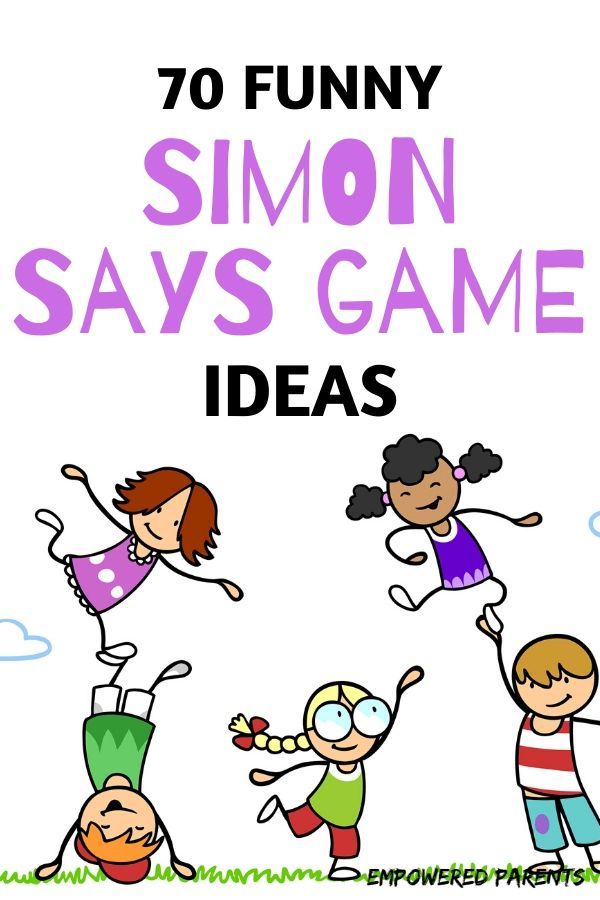 Simon Says is one of those classic games kids will always love. I played it frequently when I was teaching in the classroom and it was always a hit.

Try this list of funny Simon Says commands and your child will soon be begging you to play it again and again.

The best thing about this game is how educational it is. You can play it with just your child or a group of children.

Either way, everyone will have fun and, at the same time, develop some crucial skills for their development.

Here is a quick look at how much kids are learning during this game, followed by 70 funny Simon Says ideas that should also inspire you to make up your own fun commands.

Your children will learn all kinds of skills by playing this game of funny actions! You can play it the traditional way, or you can play Simon Says with a twist, to teach a particular skill.

In this article, I have divided fun, silly commands into various skill sets. Pick one set at a time or play a few different Simon Says games to work on specific skills.

Feel free to alter and make up your own funny things to act out.

The sections go as follows:

How to Play Simon Says

How do you play Simon Says? Here are the basic rules:

Here is a list of the best Simon Says questions, divided into skill sets. These ideas can be used at home or in the classroom.

As children grow, they naturally become aware of their body and its parts. Teaching kids about their body develops body awareness, which is an important part of a child’s physical development.

They also need to learn how each body part works and its function. This will help them to have better control over their bodies. Here are ten Simon Says prompts to help your child learn this.

7. Simon says touch your back

The midline is the imaginary line that vertically cuts the body in half. Children need to be able to cross the midline for a variety of activities, including tying their shoes, getting dressed or reaching for a toy.

It also helps them to read more fluently as they rely on visual tracking to cross from the left side of the page to the right.

Try these Simon Says instructions to build this vital skill.

Prompts to Help Cross the Midline:

12. Simon says touch both elbows at the same time

13. Simon says touch your right knee with your left hand

16. Simon says high five the person next to you (this can be Simon if playing with only one child)

18. Simon says touch your left shoulder with your right hand

19. Simon says wave your arms above your head

20. Simon says twist from side to side

Gross motor skills involve movements that use the larger muscles in your body. This includes running, climbing, jumping, dancing, etc.

Using these muscles each and every day helps your child to strengthen and coordinate the muscles they need in order to function.

It is vital for your child to learn how to use the major muscles in their body to help them develop great balance and strength. It also helps them to be able to carry out regular movements with ease.

21. Simon says run around in a circle really fast

22. Simon says climb up the stairs (or on the couch or something nearby if you don’t have stairs)

23. Simon says roll over twice on the ground

25. Simon says pretend to be a fish and swim around the room

27. Simon says act like an elephant and swing your trunk around

29. Simon says spin in a circle with your arms out

30. Simon says jump up and down ten times

Simon Says is one of the best games to teach your child good listening skills as each command requires listening to sets of information:

This helps your child learn to pay attention to important details along with learning to listen to instructions given.

These listening skills will help children to follow instructions at home, as well as throughout their schooling years.

You can make them as easy or as difficult as the child needs. Start off with simple instructions and make them more challenging as you go.

You can also speak quickly to see if they can keep up with you, or add words or phrases not related to the command.

Switch it up to make sure you are beginning with “Simon says” only for some and not all of them. Go back and forth to allow them to listen and follow correctly.

31. Simon says bend over to touch your toes three times

33. Simon says spin in a circle, stopping in the same spot you began

34. Simon says solve this problem. Answer out loud as soon as you solve it. What is 5 x 3? (you can adapt this to fit their grade level and skills)

35. Simon says do six jumping jacks as fast as you can

36. Simon says touch each knee with the opposite hand

37. Simon says count to ten in your head. Raise your hand when you’re done

38. Simon says close your eyes and balance on one foot. You can choose which foot

39. Simon says pat yourself on the back because you are doing a great job!

Similar to listening skills, you can give multiple instructions at one time to help your child remember what was said. Your child will have to practice listening and memorizing at the same time.

This will help your child when instructions are given and help them to do better at school. Again, you can alter these to make them more difficult, keeping age and concentration level in mind.

For this game, always say “Simon says” so your child can focus on remembering without also needing to listen to whether or not the command should be followed.

41. Simon says turn around two times and then clap your hands

42. Simon says wiggle your nose. Then, smile and show your teeth

44. Simon says touch your left earlobe at the same time as you touch your right knee

46. Simon says blink five times in a row. Then, turn your head to the left and say the word pig

47. Simon says act like a dog. Bark three times. Then sit down on the ground.

49. Simon says put your hands on your head. Then turn around twice.

50. Simon says touch each of your fingers on each hand. Then do the same thing with your toes.

Playing Broken Telephone is another fun way to build memory.

When you look at something, your brain will try to understand what it sees. This is visual perception.

In this version of the game, you will still say Simon Says, but the instructions will be silent. Instead, you will show the actions the children must follow.

This will help them develop strong visual perception, which is used almost every second of the day. Their brain will get stronger, and they will be able to understand more of what is going on around them.

51. Simon says (clap your hands, then hold your elbows with opposite hands)

52. Simon says (spin around in a circle)

53. Simon says (make a heart with your hands)

56. Simon says (touch both earlobes at the same time)

57. Simon says (bend down to touch your toes)

60. Simon says (fold your arms and look side to side)

Another great way to work this skill would be to make a set of Simon Says action cards. Draw the actions on the cards and flash the cards one at a time. This takes a bit more concentration and brain power!

In this variation, you can make your child Simon. He has to think of his own commands that you must follow. This helps to strengthen vocabulary as he must think of what to say and do.

If he is already reading, pass him this article to use these ideas as a start, and then continue making up his own. If your child is still young, he can just make up his own ideas.

62. Simon says act like a kangaroo and jump up and down

64. Simon says twist from side to side

66. Simon says to pretend to play your favourite sport

67. Simon says do a specific exercise

69. Simon says act like you are sweeping the floors

70. Simon says touch your elbows with the opposite hands, then do the same with your shoulders

Expose your kids to other games such as Musical Statues, the Odd One Out Game, or a game of following directions to draw a picture and you will be building many great foundational skills while having fun.

Wonderful ideas. I will insert them in the preschool time table. Many thanks.

You're welcome Vivian. Enjoy playing it with the kids!

Great ideas!! I cannot wait to use them in my Spanish class with children! So much wonderful vocabulary they will learn while having fun! Thank you so much!! Happy Thanksgiving!!

You're welcome Ana! Enjoy using them in your class. Have a great thanksgiving!

my kids loves this game!

Thank you for sharing so useful and great ideas.

i love those games

Incredible list of ideas! Just amazing. I can't thank you enough. Simon Says will never be the same!!!

I'm so glad you liked these ideas Judy!