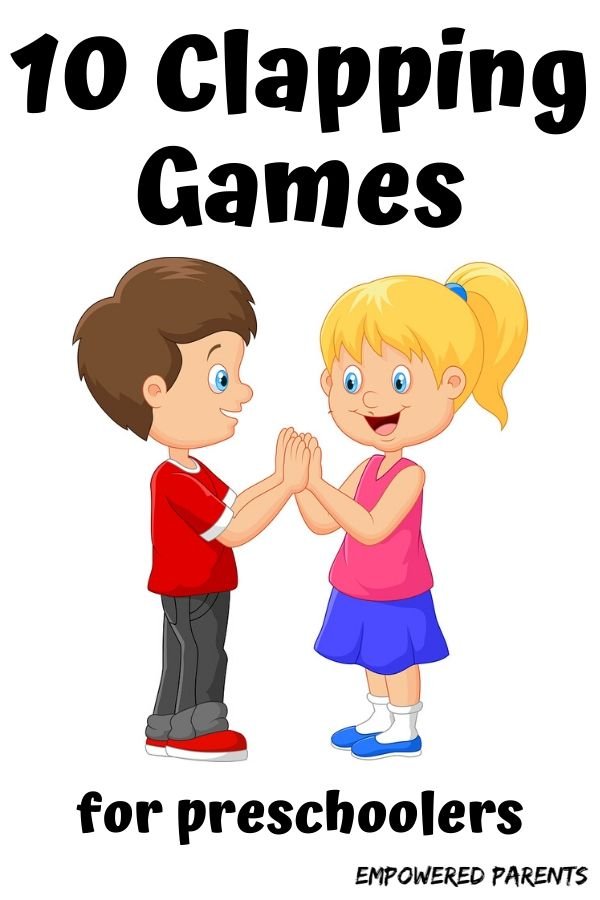 Clapping games are often a favourite with young children.  There are a variety of different ones to try that will teach your kids many important skills, and are loads of fun too.

Here are some cool clapping games for kids in preschool or kindergarten.

What are Hand-Clapping Games?

Hand-clapping games are played by clapping to a rhythm or following a series of clapping movements.

They usually aren’t competitive, but rather are about working cooperatively or following set movements. They can be very educational. These games help your child learn to listen or gain some great coordination skills.

Where did Hand-Clapping Games Originate?

The earliest known clapping game –  “Pat-a-Cake” – was found in Europe in 1698. It is still very well-known and parents play it with their babies. More games originated in France around 1820.

Children’s clapping games really took off around the 1960s and were typically played by girls.

The Benefits of Hand Clapping Songs and Games

The importance of play can be seen in the many wonderful benefits of playing hand games. Here are just a few of them.

Clapping games will definitely teach your child rhythm. They will learn to clap to the beat of all sorts of songs and sing along as well.

Many clapping games will teach your child to listen in order to follow instructions. Certain games require your child to only clap when they hear a certain word. Here are some other games to build listening skills.

These games will also help build your child’s vocabulary. Many clapping games involve singing along in addition to clapping and will help them learn new words with each song you sing.

Many clapping games don’t only involve moving the hands. Some use different parts of your body to clap along with.

By doing these movements, your child will learn to cross the midline which furthers their development, both physically and mentally.

No matter what age, when your child plays a clapping game, they are using the frontal lobe of their brain. Each time they play, it strengthens their brain.

As your child plays these games, their level of understanding and thinking will improve, they will learn to communicate better, and so on. Their cognitive skills will skyrocket by playing all kinds of fun, educational games.

Along with learning rhythm, your child will also learn about sequences. In many clapping games, you are required to clap a certain way, in a certain order. They will learn to order and sequence the movements as they play.

If played with multiple kids, your child will learn great social skills as well. They will learn to work together, to teach the moves to new children, and to develop patience and understanding when they or others get the moves wrong.

There are a huge variety of games to choose from. Some are more suitable for small kids in preschool, while others are a bit more challenging as they require more coordination.

You can even make up your own as you go as they are easy to do and fun for your child. Some can be solo clapping games with only one child, while others can be played with a group.

Try to practice and play these games with your children often, so they can get all the wonderful benefits mentioned earlier.

Here are some fun hand clapping games that your child will love playing.

While you read a story to your child, you can have them clap along. Every time you mention a particular word, such as “monkey,” your child must clap to the word. This is a great way to teach listening.

You can read a story, or simply tell your own story. You can change the difficulty as your child needs, such as doing multiple words or even phrases.

The next 3 games are all hand clapping rhymes. These are some of the most commonly known. There are so many of them to choose from, and you can make up your own as well.

Here are some of the classic clapping songs for kids.

Pat-a-cake, pat-a-cake baker’s man
Bake me a cake as fast as you can
Pat it and roll it and mark it with a “b“
And put it in the oven for Baby and me

To play the patty cake game, make up different hand motions relating to the words. Tap babies hands together softly as you sing “pat-a-cake” and clap faster as you sing “as fast as you can.”

They jumped so high, high, high
They reached the sky, sky, sky
And didn’t (or never) come back, back, back
Till the 4th of July ly ly.

They jumped to the flow, flow, flow
They stubbed their toe, toe, toe
And that was the end, end, end
Of the elephant show, show, show.

Typically, you simply clap along with the words. You can point to pretend buttons and your back to add alternative movements.

Other versions have you clap your hands and thighs along with a partner. You can decide according to how many kids you have and what they prefer to do as well.

This cool hand game is played with the fists and different parts of your hands. You use both hands at the same time. This is done with a partner. The goal is to try to go as fast as you can!

The motions are as follows:

This: front of your hand, as a clap

That: back of your hand, as a clap

Lemonade
Crunchy ice
Sip it once
Sip it twice

The lemonade crunchy ice song one is a little more complicated than the previous ones. Once your child has learned the first couple of clapping songs, they should be ready for this.

For each verse, you will use the up and down clap method. One hand is flipped upward while the other is downward. You do this hand-clapping rhyme with a partner.

At the end of the song, you will make the motions, as mentioned in the song. When you say “freeze”, you must stand as still as possible. The first person to move loses.

This one is basically like the original Simon Says, but you can make clapping motions and other movements to help your child with their balance and physical movements.

Only do movements that are related to clapping and extend it to other parts of the body, not just the hands. Have them clap their thighs, or clap behind their backs.

This will help them learn the different body parts as well as help with crossing the midline and other gross motor skills.

With this clapping game, you will make a simple clap motion with a partner that goes as follows:

When the Cup song came out a few years back, everyone wanted to learn the rhythm. Thus, the Cup Game was born.

Simply get a group of kids together, or even just you and your child, and learn the cup song. It is a very easy pattern to learn.

Once everyone has learned and got it down pretty well, play the song and make the motions.

If there are multiple children, go in a circle and actually pass the cup to each other. If not, just keep using the same cup over and over again.

The goal is to go through the entire song without messing up! However, if you do, just start up again as soon as you can.

Here are the moves to the cup song:

Follow these hand movements or try the movements in the video below:

Then, you simply choose a category, such as animals.

The first person then says the first animal that comes to their mind, followed by the three claps. The next person continues.

You cannot repeat an animal either. The person who takes more than three seconds to say an animal is out.

It helps the children focus and concentrate on being able to say the right thing at the right time. It also aids in their listening skills.

These are just a few simple, fun hand-clapping games to teach your kids. Each can be done with only one child or with a larger group.

I hope you’ve discovered some new hand games to play.

Taking the time to play these games often will help your child reap all the amazing benefits, along with spending quality time together.

I found it useful as a parent.Thank you

I'm glad you enjoyed these, Eunice!

Great job Miss Tanja!!! your blog post always remind me of my pretty childhood days, thank God I didn't miss out in all this games you always recommend even though we didn't know the benefits of these games, my children will surely not miss out too.

Thank you for your kind words :-)