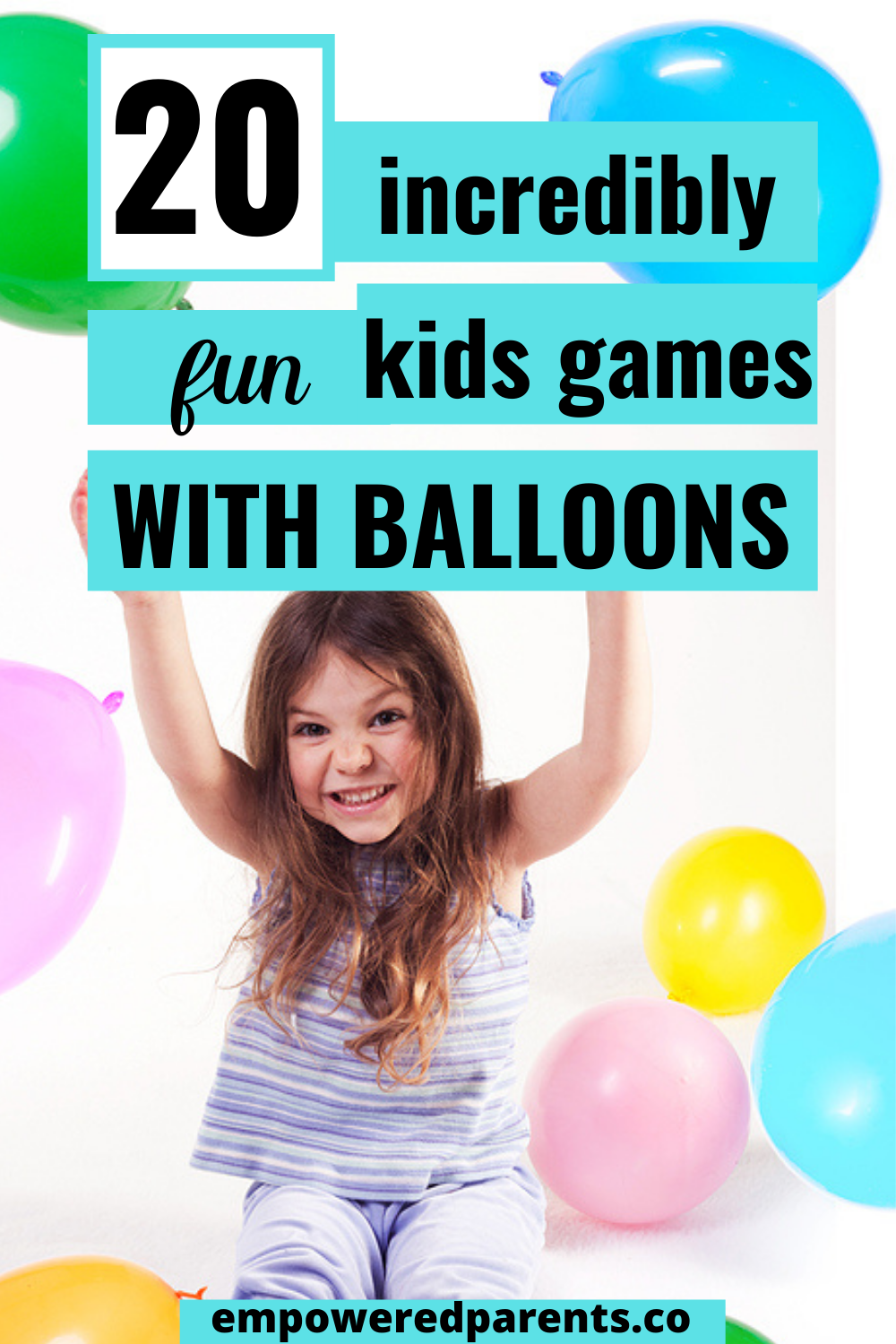 Balloon games are great fun, whether you are playing them at a birthday party, at home or during a class activity.

They are good for keeping kids entertained but they even make it onto my list of learning through play ideas as kids can actually pick up many skills while playing with them.

Here are some fun kids games with balloons that preschoolers – and even older kids – will enjoy.

Some of these are well-known games, others are variations and new ideas to try.

This is a fun party game with balloons. Traditionally played with a ball or beanbag, Hot Potato is a cool circle game that gets all the kids participating.

Playing Hot Potato with a balloon adds an extra challenge as kids must make sure the balloon doesn’t slip out their fingers or drift away.

Another party game, Pass the Parcel can also be played with a balloon, but the object of the game changes.

Wrap a medium-sized balloon in layers of gift wrap or tissue paper and pass it around the circle while the music plays.

When the music stops, instead of unwrapping a gift, the child who is holding the balloon must unwrap a layer of paper without popping the balloon.

If a child pops the balloon, the game ends!

Balloon toss is one of the most popular balloon activities for kids. It requires no prep, and all you need is a balloon.

Best played in pairs, have a balloon rally by hitting the balloon back and forth with a partner, using your hands to hit the ball.

Count how many times you can rally the ball without dropping it.

As a variation of the previous game, use tennis rackets, or other soft rackets and hit the balloon back and forth with a partner.

This is quite challenging and best suited for older children.

Each child must keep their own balloon in the air by hitting it upwards, without letting it drop to the ground.

If playing with a group of children, they all begin tossing the balloon up at the same time. If anyone drops their balloon, they sit down.

Play until you have a winner – the last child standing and still hitting their balloon.

This can also be played with a small bat or racket. Use the bat to hit the balloon into the air and keep it from falling.

For this game, put children into groups of 2 to 4, with a single balloon per group.

The object is still to keep the balloon in the air without letting it touch the ground, but kids have to take turns, in sequence, to bat the balloon upwards.

They each get a chance to hit it up, then they must move to let the next person hit it and so forth while keeping the correct order of children.

If the wrong person touches the balloon, or someone touches it twice, the game is over.

For younger children, use pairs and encourage them to take turns. Bigger groups will be too challenging.

This is one of the most fun games using balloons and is sure to get kids laughing and moving their bodies during this team activity.

Instead of each child keeping their own balloon in the air, the group of kids must keep all the balloons in the air, by working together.

Time them to see how long they can collectively keep all the balloons up in the air.

For the final variation of balloon toss, each child must keep their balloon in the air, without using their hands at all.

You can bat the balloon with your arm, legs, head or any other body part, as long as your hands don’t touch it.

See how long kids last and play to get a winner for each round.

One of the most fun things to do with balloons is to fill them with water and throw them at each other.

This is a great outdoor game to play on a hot day, with everyone dressed in swimming costumes.

Make some safety rules – such as no aiming at faces – and then get out the way and let kids have some fun.

If you’d like to play to a winner, you are out if a balloon hits you and bursts open.

A less messy version with balloons filled with water, throw them at a target drawn on the wall outside and see who’s balloon landed closest to the target.

Get kids to practise their shot put skills for the Olympics. You’ll need to do this where you have a long patch of grass.

Taking turns, hold a balloon filled with water, aim and throw it as far as possible. Give each child a different colour balloon so you can see who’s balloon landed the furthest.

Feeling really brave? This is a super-fun option for parties, as long as you’re prepared for the mess.

Put liquid paint into the balloons before blowing them up and having some paintball fun.

Make sure everyone is wearing a costume and use the rules from the water balloon fight. Having a swimming pool to jump into after the game, or a hosepipe to hose everyone down, would be great.

Using static electricity, challenge kids to rub a balloon on their clothes and see if it will stick to their clothes.

Time how long the balloon sticks or how many balloons a child can get to stick at the same time. Kids can work in groups to stick balloons to one child.

Have a balloon throwing competition. Children stand in a row, each holding a balloon.

They must aim and throw their balloon, seeing who’s lands the furthest when it hits the ground.

Kids will find this amusing as balloons filled with air tend to float around and not move very far. It’s a game of pure luck.

For a really cool game, make a scavenger hunt for kids that starts with a single clue inside a balloon.

In the balloon, provide a clue that leads them to another balloon with the next clue. Keep them going until they find their “treasure” at the end.

Using a low basketball or netball net, challenge kids to aim and throw the balloon into the net – not as easy as it sounds!

Make a swing ball game, using a balloon. This game is excellent for eye-hand coordination and is something you can set up and use repeatedly.

Attach a balloon to a piece of string or rope and fix it to the top of a long pole, hammered into the ground.

Use a small, light bat or racket to hit the balloon back and forth with a partner. This can also be played alone.

For this fishing game, you’ll need a blow-up swimming pool or large box, some magnets, rods, string, paper clips and lots of balloons.

Attach a paper clip to the end of each balloon and drop them into the “pond”. Make fishing rods with wooden dowel sticks or anything you can use as a makeshift rod.

Attach magnets to the end of the rope/line and go fishing!

This game is similar to Dodge Ball, but it hurts a lot less.

Split kids into two groups, facing each other. Armed with balloons, let them throw the balloons at the other team, trying to get them “out” by touching any part of their body with a balloon.

It might not be easy to throw an empty balloon with much force, but be careful not to get touched by those light balloons that go floating past you!

Make balloon swords by attaching a straw to the part of the balloon that ties closed.

In pairs, have balloon duels. If you manage to knock your partner’s balloon off their straw, you’ve won the fight.

I hope you’ll enjoy trying out these fun games with balloons.