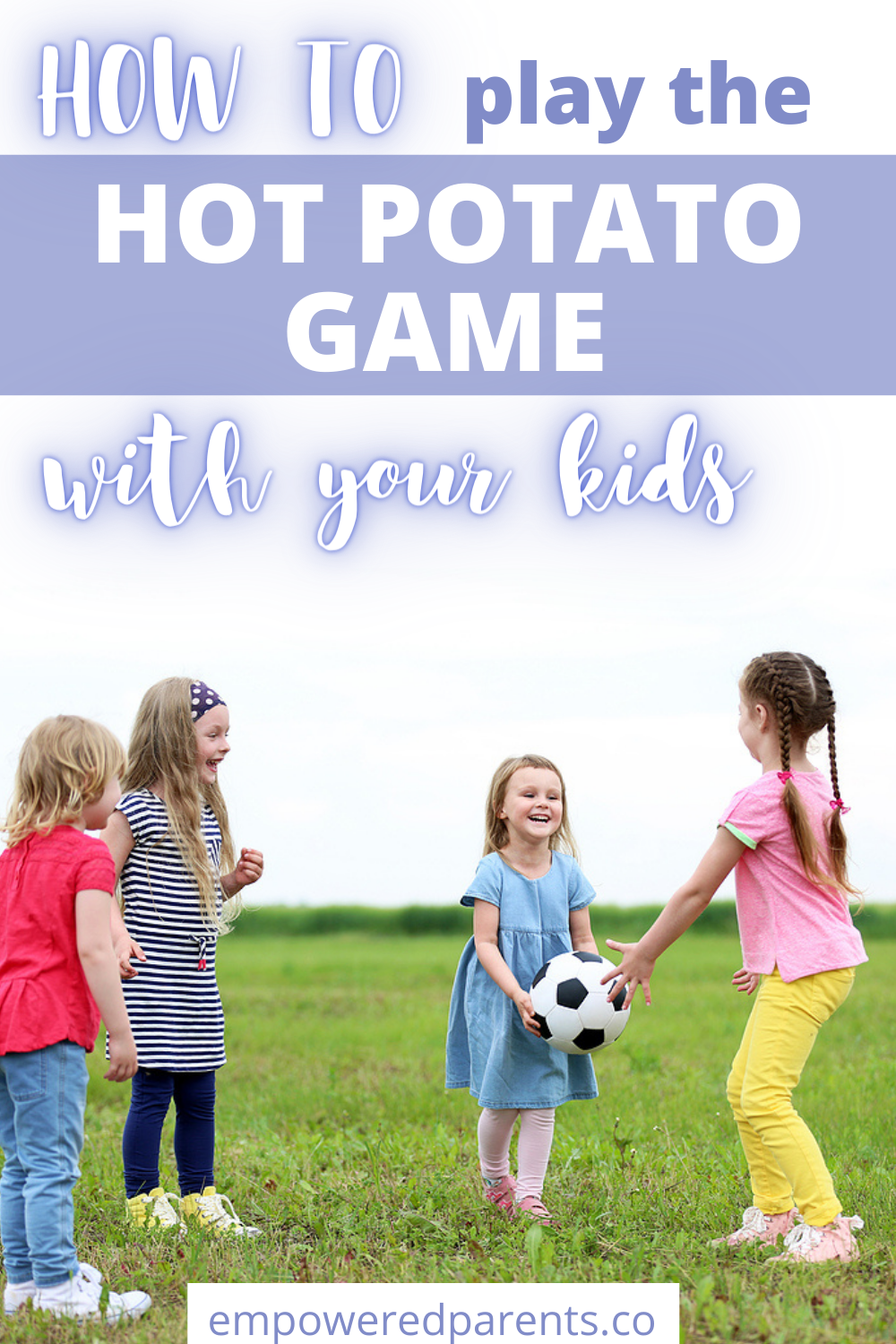 The Hot Potato Game is a fun, active game for young kids that has been around for ages.

Find out how to play it and adapt it to your kids’ level. There are also some ideas for Hot Potato game songs.

What Kind of Game is Hot Potato?

Hot Potato is a classic party game that’s fun and simple to prepare. Kids enjoy it and it gets everyone participating.

It is also a great game to play at home with your children or in class as a group carpet game.

Kids must pretend they have a steaming hot potato in their hands and pass it around, making sure to let go of it as quickly as possible so they don’t get burnt.

There are many educational reasons for playing this game, such as:

This game can be played with different ages but you may need to adapt it as it is challenging for young kids.

A Hot Potato game for preschoolers will be quite different to a game played with older kids as their ball skills are still developing.

How To Play Hot Potato?

All you need is a ball, beanbag or any other toy to represent a potato. Playing music is optional.

The rules of Hot Potato are simple:

The object of the game is to not drop the ball, get caught with the ball or get burnt.

Kids must be encouraged to pass the ball as fast as they can from person to person, as if they were handling a real hot potato that could burn them.

Playing with one child?

If you’re playing this game with your child, sit across from each other and toss the ball or bean bag back and forth. Whoever gets caught holding it when the music stops, loses the round. Play many rounds.

This can also apply to siblings or small groups playing.

There are a few ways you can play this game:

Sing a verse of a song together or chant a rhyme while you play, instead of playing background music. When the verse ends, the person holding the ball is out.

Use any well-known song or sing this verse, specially created for this game:

Play some fun music in the background. Stop it every now and again.

You can also find pre-recorded hot potato music that stops, which frees up your hands to join in the game.

Keep scrolling for some examples of music.

Play a version where the verse gets faster on each round and kids need to keep up, passing the ball without dropping it. Listening to faster music will naturally make kids pass the ball faster.

This will be too challenging for preschoolers, who may drop the ball more than catch it.

The tune linked above for the Hot Potato verse is a great one to play in the background as it gets faster. Or, sing the tune and get a little faster on each round.

For this game, tell kids you want to make potato soup. Place a large hula hoop in the middle, with kids sitting in a circle around it.

Every time someone goes “out”, they must sit in the hoop. They become a potato that gets added into the pot of soup. Kids will enjoy squeezing into the soup together when there are a few of them.

Instead of going into the middle if you’re “out”, kids must pretend to be dead by falling down in the spot they were sitting in. They must not move until the last person has won the round.

They have been “killed” by the burning hot potato. This may be suitable for older kids as younger ones would struggle to lie still for this long, without wanting to see what’s happening around them.

Here are a few music tracks that will work well when played in the background: