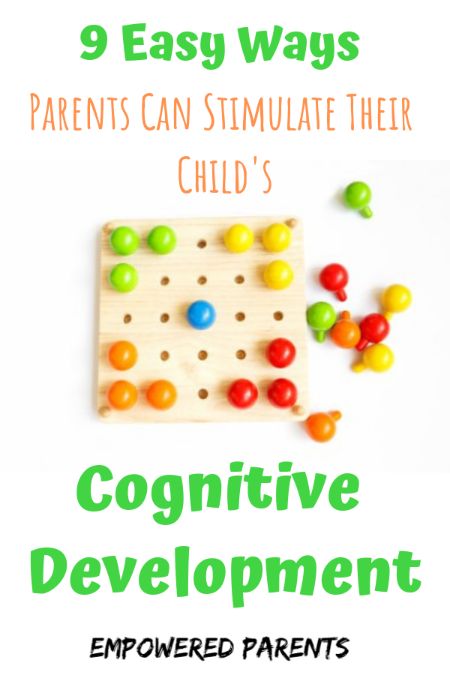 How much of your child’s intelligence is set in stone and how much of it can you influence?

Although genetics plays a definite role, children are hugely impacted by their environment and the stimulation they receive from their parents. Cognitive development in early childhood is certainly not set in stone!

It’s important for you to understand how your children learn, what stage of development they are in, and how you can best support them on their journey.

In this article we’ll take a look at:

What is Cognitive Development in Early Childhood?

Cognitive refers to a child’s intellectual skills. It includes how a child processes information, his understanding of concepts, his ability to learn expressive and receptive language and his perceptual skills.

Cognitive development is one of the four major areas of a child’s holistic development, along with:

What Age Does Cognitive Development Begin?

Babies start to develop their cognitive skills from birth. In the past, this wasn’t always known. It was presumed that babies were not yet able to process on a cognitive level until they were able to use language.

Now we know that you can improve and stimulate your baby’s intellectual skills right from birth.

There are many types of cognitive skills and complex thinking processes that children reach at different ages. Here are some examples of cognitive development in early childhood:

This is not a full list of cognitive skills – just a few examples. There are many, many milestones to be reached during the first few years.

What are the 4 Stages of Cognitive Development?

Before you can help stimulate cognitive development in preschoolers, it is useful to know what stage of thinking they are in and how their thinking should evolve and advance with time.

If your child is a toddler or preschooler she is in the pre-operational period.

Here is a quick video if you’d prefer to watch a summary of the stages, or read on for a brief explanation below.

These are examples of how young children typically think. As they move through the cognitive stages their thinking matures from the descriptions below to more advanced thinking patterns.

How to Improve Cognitive Skills In a Child

During the preschool years, parents can help build their children‘s cognitive development through play and simple activities.

There are few activities that will build cognitive skills in preschoolers at the rate that reading to them will.

While reading to your children, you will be developing:

Language is one of the most important aspects of early childhood cognitive development. The best way to build it is to expose your child not only to hearing language but also to using it.

You are the primary source of your child’s language in the early years and so it is important that you use it in a grammatically correct and stimulating way. Your child will learn to speak by imitating you.

Talk to your child all the time, at every opportunity you get. Talk to him in the car, in the bath, while preparing supper and while playing.

The less time children lose watching TV and other screens, the more they will engage in conversation with you and others around them.

Talking is crucial to help a child’s cognitive development. Here are some fun word games to play in the car.

Nursery rhymes are more than just a fun activity children enjoy. They are actually highly stimulating and a great cognitive activity for preschoolers and toddlers.

They teach children language patterns and they develop vocabulary. Most importantly, they build a child’s auditory perceptual skills – such as auditory memory, discrimination, etc.

Expose your children to:

Learning nursery rhymes is an important aspect of pre-reading skills and will set your child up for reading success later in school.

Thinking is an important skill for adults and a skill that needs to be actively worked on. Many adults struggle to think “outside-the-box,” coming up with solutions or thinking critically.

These stimulate your child to actively practise thinking.

There are various examples of thinking skills. Here are just a few:

Children spend much of their time naturally engaging in creative activities, whether they are drawing, painting, moulding or creating something with waste materials or boxes. Even making up a game during fantasy play is a form of creative expression.

Whenever a child is using their creative mind they are building their cognitive skills.

What children need is a platform to be creative. They need materials, stimulation and opportunities. From there, the creative process is a natural one.

Problem-solving is another area that many older children, as well as adults, struggle with. There are few careers today that do not rely heavily on a person’s ability to solve problems.

This is a skill that can be taught from an early age with very simple problem-solving activities and fun games.

The beauty of problem-solving at a young age is that children don’t usually view problems as problems, but rather as challenges to be overcome.

Puzzles are one of my personal favourite activities for kids. They require so much concentration and effort, as well as perseverance to complete.

Children who are solving a puzzle are thinking deeply and building their intellectual capacity.

The most important thing to remember is that a puzzle should be challenging but doable. Choose one that is appropriate for your child’s age. The younger your child, the fewer pieces the puzzle should have and the bigger they should be.

You should see your child challenging himself to finish it and spending some time on it, but he shouldn’t be frustrated or not able to complete it in one sitting.

As your child gets more confident with them, he will begin to seek out bigger, more complex puzzles.

Try these awesome printable puzzles with your kids.

Movement is an excellent idea for stimulating brain growth.

This video explains how movement develops neural pathways in children. It also clearly explains how vestibular movement affects learning to read and write later on.

Movement wakes up, resets and re-energises the brain. It helps a child’s development in two ways.

Firstly, developing gross motor and fine motor skills helps children with their overall development. Secondly, you can use movement breaks during any activity to reset your child’s concentration.

Just two minutes of doing a physical activity or going for a run outside can allow a child to go on concentrating and finish the activity they were working on.

Symbolic play is when children engage in pretend or make-believe play using objects to represent other objects. For example, a child who uses a block as a cell phone.

Symbolic play is very natural to a child and is a highly creative form of play that will develop your child’s intellectual skills.

During this kind of play, children are constantly thinking of new ways to act out their world in order to make sense of it.

Symbolic play is the next step up from functional play where a child will use an appropriate object – for example, a toy phone as a real phone.

Later on, when they pick up a block to use as a phone, it means their brains have developed the ability to use the block to represent something else. This is an advanced skill.

the only thing children need to engage in symbolic play is access to materials, toys, and plenty of free time.

A child’s environment can greatly impact how much stimulation they are receiving.

Try to vary your child’s experiences by offering different manipulatives. For example, introduce Lego and after a few days, swap the tub and offer wooden blocks instead. This will encourage your child to think of new and different ways to play and create.

Playdough is an excellent and highly educational material that can be made at home.

Last but not least, free play is undoubtedly the most important tool to develop cognitive skills.

Play is what children do. It’s what they spend all day doing and it’s what they naturally need to do in order to learn.

Everything your children will learn before the age of 6 will be primarily through play.

In order for this to happen, children need time to be able to play. Unfortunately, in modern times, they often need to sacrifice play time in order to attend their extra activities.

Make play a priority in your home and allow your child to play as much as they are naturally inclined to.

Free play requires no adult intervention. All your child needs is the time and freedom to do it as they choose.

These are just a few ways to develop children’s cognitive skills.

Or shop for instantly downloadable and printable kids’ activities and games. Get more info here.

Thank you , clear and well explained . From your guide its easy to understand the roots of child development .

I'm glad you found this helpful, Smeetha! Thanks for reading.

It's a wonderful guide that your sharing. so useful, thank you very much!