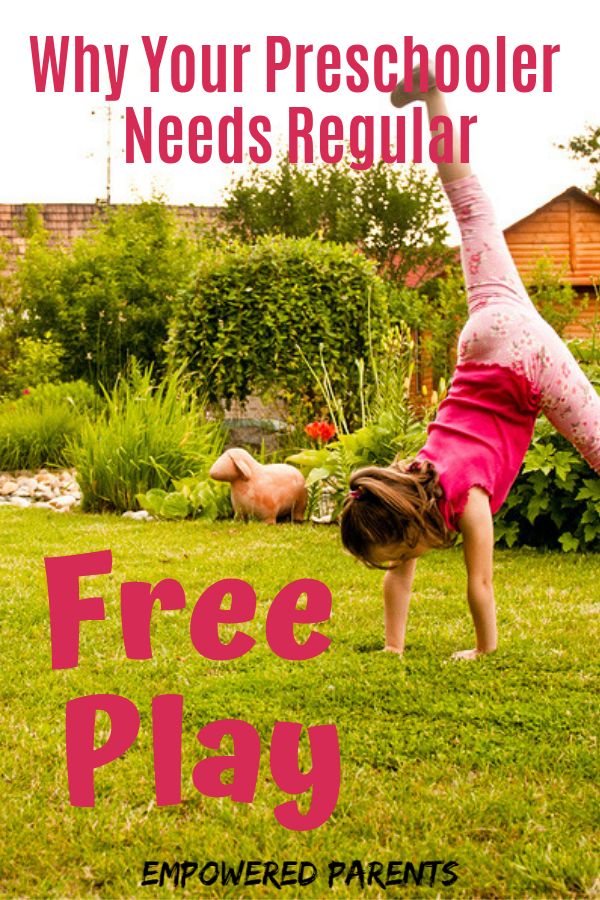 Children engage and interact with the world around them through play. Free play during early childhood is about exploring, experimenting, discovering and learning.

Let’s take a look at a few of the benefits of free play in early childhood and why it should be a regular activity for young children.

What is Free Play?

Free play is any kind of play that is initiated by a child. Outdoor play and indoor play can both be considered free play, as long as your child has the freedom to control their own play experience.

There are two types of play activities – adult-guided play and child-directed play. Both are important for a child’s development.

Here are some examples of adult-guided play activities:

What Are the Benefits of Free Play?

During the preschool years, the majority of a child’s development happens during unstructured play, so the importance of free play in early childhood cannot be underestimated.

Preschoolers are developmentally in the stage of informal learning through play.

Here is a brief look at 12 areas of development that free play will grow.

Free play is important for a child’s overall brain development. As children explore and learn, they form new connections and pathways in the brain.

Children’s brains are processing at double the speed of adults’ brains. This is a significant amount of brain development. The stimulation a child receives early on will determine how many neurons are formed and which do not form. [source]

Play is a creative activity. Children are constantly thinking up new games and activities to keep themselves entertained.

During fantasy play, for example, children create stories and events and act them out as if they were happening. In an art activity, children’s visual creativity is developed. When playing with construction toys, the designing of a building brings out creativity.

All forms of play develop creative expression. Find out how you can encourage creativity in your young child.

A child’s first mode of learning social skills is through interacting with their parents. After that, social interaction is built by playing with siblings or friends.

During free play, children learn many social skills such as:

Planning skills are important during the early grades. They help a child know how to plan work before starting or carrying out a task logically and within a given time frame.

The skill of planning is constantly worked on during play. Whether a child is planning a house before building it or planning where to stick a picture on a page, they will develop the ability to plan with time and practice.

Planning is a skill that requires careful thought and consideration. A child learns to think about the desired outcome before beginning and takes the time to think about how to execute the task.

Play is a great way to practise planning on a physical level, before moving on to planning on paper.

A child develops physically from the centre of the body outwards, to the limbs. In other words, their large muscles develop first, followed by their small muscles.

Large muscles are developed through free play activities such as:

Small muscles are developed through free play activities such as:

In recent times, the increase in screen time and the decrease in playtime have had a massive impact on the classroom. More and more children have underdeveloped motor skills and are struggling academically as a result.

Every child will encounter multiple problems during play sessions. They will need to figure out how to stop their tower from tumbling over, how to make a tent out of blankets, or how to change the rules of the game to make everyone happy.

Knowing how to solve problems is a skill that is needed in school and in adulthood and is even a crucial skill needed in every person’s career.

The beauty of problem solving during play is that when children are relaxed and engaged in an activity of their choice, they don’t see problems as being problems. Rather, they are merely challenges that need to be tackled.

The more invested the child is in solving the problem, the more determined they will be.

This is a healthy attitude to take into adulthood, where problems can never be avoided and are best seen as challenges.

Children usually verbalize what they are doing as they play, even when they are alone. Not only are they increasing their vocabulary, but they are also practising language structures and sentence construction.

Playing with others provides an even bigger language learning opportunity as they interact and learn from each other through conversation.

When children are accustomed to having free time to play every day, they develop a sense of independence and enjoy their time to themselves, or their time with their own peers.

As a parent, it is important to not be present during every play session or your child will develop a dependence on you to always be around.

This is also true for playdates, which are a healthy and important part of a child’s youth.

Try not to plan every aspect of the playdate and let your child show his independence as he plans the play session himself and learns to entertain his friends without needing adult guidance.

Visual perception is the brain’s ability to interpret what it sees. This is very important for learning to read and write and being able to distinguish letters, words, patterns, etc.

This skill is developed naturally through play.

Auditory perception is the brain’s ability to interpret what it hears. This is equally important for learning to read.

Before a child can learn to distinguish the sounds of letters and work with these sounds, they must develop an understanding of sounds and patterns in sounds.

Again, this is developed naturally through play.

When a child understands their body in relation to the world around them, they have developed spatial perception.

Children can develop this by climbing through tunnels, running around, playing movement games, crossing their midline, etc.

Children with poor spatial perception will often bump into others when playing a game or have poor body awareness and understanding of their position in space.

If a child’s spatial sense is not developed, they will struggle later, especially when writing letters and words and spacing their work on a page. They must first learn this skill on a physical level, with their own bodies, before they can understand space on paper.

Last but not least, play is a way for children to express themselves and make sense of the world.

During an activity such as fantasy play, a child has a safe way to act out their emotions and learn to cope with them. Children use play as an outlet to express how they feel about the world and everything that happens in it.

These are just some of the free play benefits. Never feel guilty if your children are “just playing.” This is the best activity they could be doing!