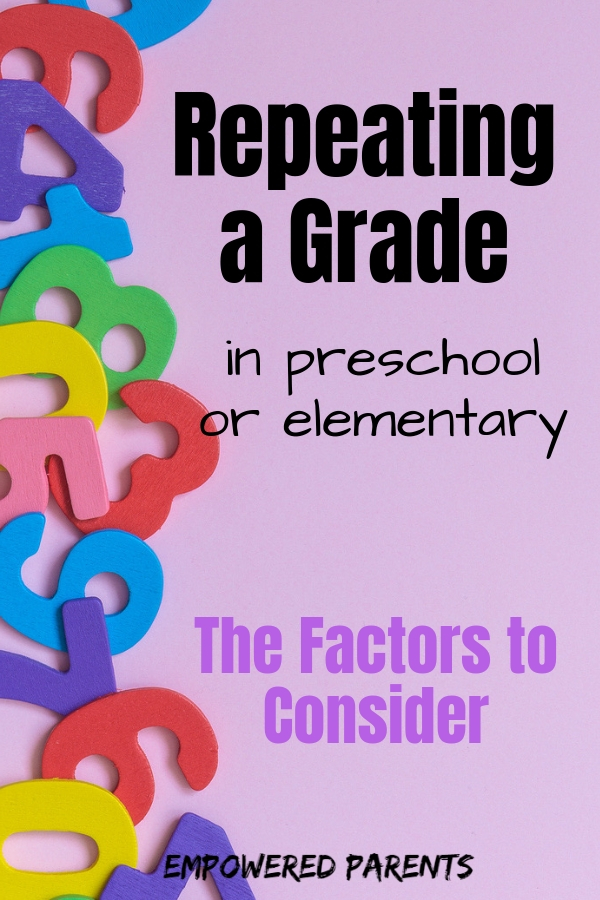 If your child has ever repeated a grade, or if a repeat has been suggested to you, then you know how difficult it can be to face that reality.

In fact, it is often more upsetting for the parents than for the child.

Parents often ask the question “Should my child repeat kindergarten/first grade or will I be doing more damage than good?”

When Should a Child Repeat a Grade?

The simple answer is… as early as possible.

Repeating kindergarten or preschool is a lot less stressful for a child than repeating a class in primary school.

Repeating a grade in elementary/primary is much less stressful than repeating in the higher grades.

Read on to find out why.

The Benefits of Repeating a Grade

When the pros and cons of repeating have been researched based on your child’s situation, there can be many benefits, such as:

I’d like to share the story of one of my pupils who repeated Grade 1, and how it affected him and his parents.

It is also helpful when deciding about repeating preschool.

Then, read on to find out what five factors you should consider when it has been suggested that your child repeat a grade.

When Sean started in my class in Grade 1, he was extremely playful and was always on the go. Although the entire class were still adjusting to the formal day, he really struggled with it.

Sean would often run around the class screaming or trying to engage the others in play fighting. He was constantly seeking movement.

During lessons where the class was quieter, he would often slide under his desk and sit on the floor, playing with something.

As the volume of work grew and the children were expected to complete activities on their own, it became increasingly difficult for Sean.

He would need constant reminding to stay on task.

I realized activities such as learning the sounds, answering maths questions, and especially writing, were tiring for him. Learning to read was painful.

What I also noticed; however, was that when we were playing with construction toys, Sean would build the most intricate designs and make structures that required a lot of ‘engineering’ skills.

He showed great intelligence at times but was not adjusting to academic learning yet.

Sean had also not yet developed mature social skills. He was not as mature as his peers and they would be impatient with him. At break time he would play with younger children.

How Sean’s Parents Felt About Him Repeating a Grade

When I first made his parents aware of his progress, they were not surprised, but hopeful that he would catch up just as his older brother had at his age.

They did agree to have a full assessment carried out which highlighted Sean’s areas of strength and weakness.

Later in the year, even after many interventions had been put in place, we suggested that Sean repeat Grade 1 and be given time to mature and develop grade-appropriate skills.

His parents were devastated.

They worried about many things:

Sean’s parents suggested putting him into continuous extra tutoring to catch up, but this seemed unfair on such a young child.

Eventually, they agreed to let him repeat the year.

How Sean Coped with Repeating Grade 1

I followed Sean’s progress closely throughout the next year and heard he was gradually improving.

At the end of his repeat year, his teacher reported the following:

This was a massive shift for Sean, and his parents were thrilled with his progress, along with their decision to let him repeat the grade.

He had been given the chance to mature at his own pace and come into his own. And that’s exactly what he did.

His parents had ensured that Sean would not spend the next few years struggling through school.

One day, I was filing paperwork at the end of the year for my class. I came across the folder of my highest academic achiever in my class. His maths, reading and creative writing skills were far ahead of his peers.

I was shocked to read his preschool report from two years earlier. It described him as immature, lacking fine-motor control and having poor attention in class.

I could hardly believe it was the same child.

Repeating a Grade: 5 Factors to Consider

Is repeating a grade beneficial? Is it always the solution?

Certainly not. Every child is different and every situation is different. Some will benefit greatly from repeating, and for others, it is not necessary.

There are always various factors to consider.

Is their performance in class affecting their confidence? This can have devastating effects in the long term.

If your child is feeling less than the others and aware that he is not able to keep up with them, then this will only get worse as time goes on.

Is your child young for her class? Does she often play with younger children in other classes and do others seem more mature in her class?

Perhaps she just needs time and is not struggling academically. She might be relieved to repeat the year and feel more comfortable from then on.

Have you put the necessary interventions in place? Has speech therapy or remedial therapy been suggested by your child’s teacher?

No teacher wants to deliver bad news. It often takes courage to suggest your child may need some interventions.

It would be easier to shrug it off and let next year’s teacher deal with it, so don’t dismiss what the teacher is telling you.

If a teacher brings up the need for a specific intervention, you can rest assured that your child really does need it.

It is usually glaringly obvious when you watch a child who needs physiotherapy sitting next to other children, more so than watching a child alone at home.

If these interventions are put in place as early as possible, they can often prevent repeating a year, especially if the child is responding and making fast progress.

Sometimes, a repeat with interventions is still the better option.

Repeating kindergarten, preschool or even the first or second grade is often not a big deal and life goes on.

If the problems are ignored and a repeat becomes necessary 3 or 4 years later, that becomes a difficult experience for a child.

Usually, problems tend to compound when not sorted early.

In my experience, when a preschool child has not followed a recommendation for, say, occupational therapy at 4-years old, if I ask their teacher 3 or 4 years later they will still say the child is in need of OT.

When children’s friends start to have a vital role in their life and they are old enough to understand their own progress, repeating a grade will be a lot harder to deal with.

This usually hurts their confidence and self-esteem. It is best to avoid this situation.

Is the thought of repeating a grade more of a defeat for you as a parent? Are you worried about what others will think?

Think about whether you really believe it is a bad decision or if it’s just difficult for you to accept.

When you weigh up the pros and cons, you can make an informed decision.

Speak to other parents whose children have repeated. The school will be able to connect you with some parents to chat with.

Whether or not to let your child repeat is a difficult decision but an important one. As long as your child’s best interests are at the centre of the decision, it will be the right one.

School readiness is an important factor when deciding whether your preschooler should repeat or move to the next grade.

By using this school readiness checklist you can determine whether your child has developed the necessary cognitive skills, social and emotional abilities and if their physical development is age-appropriate.