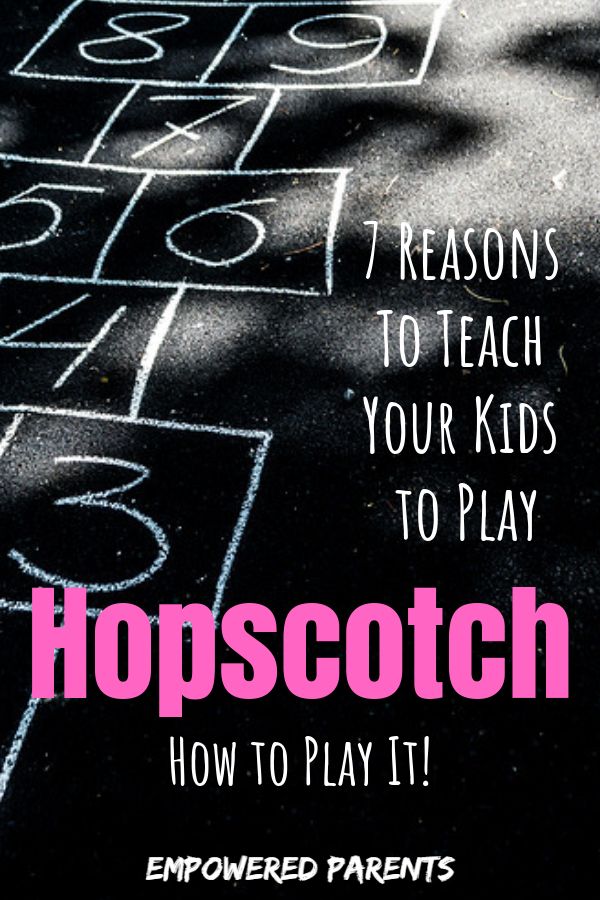 Hopscotch is a traditional game that has been around for many years. You may remember playing it at school or at home when you were younger.

This old favourite is actually a very educational activity and if you have a preschooler at home you will want to let them experience the fun and gain the benefits of playing hopscotch.

Let’s take a look at what the Hopscotch game is about and how it can help develop some important skills.

Hopscotch has an interesting history. It is believed that it first originated in ancient Britain during the Roman Empire.

The Roman soldiers used to exercise and practise their footwork by running along large hopscotch courts in their full armour. [source]

Children began to mimic these courts by drawing smaller ones and adding a scoring system.

Today, Hopscotch is played in many countries around the world.

What is the Point of Hopscotch?

In a game of Hopscotch, the players throw a marker (such as a beanbag, stone or another object) into a pattern of squares and must then hop through the shapes without touching the lines to retrieve the object.

The Incredible Benefits of Playing Hopscotch

A simple game of Hopscotch has many physical, social as well as cognitive benefits for a child. If you have a preschooler, it is well worth your time to teach him to play this game and develop some important skills at the same time.

After all, the best learning happens through play. So, how exactly does Hopscotch help a child’s development?

Here are just a few Hopscotch benefits that make this game well worth playing!

In order to play the game, a child has to follow a set of rules and play with a purpose.

There are many thought processes that go into a game of Hopscotch, such as

There is a lot of brainwork happening at the same time as the physical work which makes this game a great way to stimulate cognitive development!

It is no easy feat for a young child to follow the rules of Hopscotch so learning them would be a great achievement.

While playing Hopscotch, gross motor skills such as balance and strength are built.

Throughout the game, children must practise holding their balance as they hop on their feet, swapping between hopping on one foot at a time and two together.

Children also develop strength during this game as they need to control their entire bodies while moving through the squares and lift them while jumping and hopping.

They are moving and changing positions and building their core and general strength.

In order to place an object in the right square, not touch the line and be able to retrieve it again later, children need hand-eye coordination.

This game is good practice for this skill which will be used in all movement activities and sports going forward.

Bilateral coordination refers to a child’s ability to use both sides of the body together in a coordinated way.

This skill is important for performing everyday tasks such as eating, dressing and cutting. It is also necessary for movement activities and sports such as jumping, riding a bike or learning a sport.

During Hopscotch, a child learns to coordinate the two sides of his body as he hops on one leg, and also on two legs together. This is quite an advanced skill for a young child to master.

The squares on a Hopscotch court are numbered. While children will see the numbers printed on the squares as they jump through them, the real mathematical value comes from moving the body through the squares at the same time as counting the squares.

Experiencing numbers that increase and decrease (in ascending and descending order) through whole-body movement is the best way to learn early maths skills at this age.

Hopscotch is a game that involves taking turns, cooperating with and being considerate of others.

These are social skills that are important life skills.

How Do You Draw a Hopscotch Court?

There are several ways to draw the squares – known as a court.

Here is a simple outline for a preschooler to start with:

Hopscotch is a simple game to set up and play. It can also be adapted to your child’s age. Draw a smaller, simpler court for a young child and try one of the variations for older children.

All you need to play the game is some large sidewalk chalk and a marker such as a stone or a beanbag.

Beanbags are easier for preschool children to handle as stones could jump out of the square and one of the rules is for the marker to land in the square and not touch the sides.

To make it simpler, you could start with just the squares up to 8 and then add 9 and 10 later. Hopscotch is usually played with 10 squares.

Don’t forget to let your child help you draw the court as this is an excellent motor activity!

How Do You Play the Game Hopscotch?

So, how do you play Hopscotch, step-by-step?

These are the basic rules you need to follow in order to play this classic game. Any number of players can play, but it’s best to start with just 2 until your child learns the game.

Watch the video for an overview of the rules or read them below.

1. Draw a Hopscotch court with 10 squares (8 for an easier version).

3. Start in front of square 1 and throw the stone/beanbag into square 1.

4. Jump over square 1, land in square 2, and continue jumping along the squares.

5. Hop on one leg on a single square and land with two feet where two squares are next to each other (one foot in each square).

6. When you reach the number at the end, turn around and continue hopping back in the same way.

7. When you get back to square 2, bend over to pick up the marker on square 1, and jump over square 1 to finish the course.

8. If you touch a line at any point, your turn is over and the next player goes.

9. If you did not touch a line, continue onto the next round by then throwing the marker into square 2 and hopping through the course again (this time jumping onto square 1 but jumping over square 2 and landing on square 3).

10. The winner is the first player to complete all the courses in one round.

11. Each player must place the marker in square 1 at the start of each new turn.

Watch this video to see Hopscotch in action.

There are variations on how to play the hopscotch game; however, a preschooler will more than likely take a while to master the basic structure.

Once he is comfortable with the first 8 squares, add 9 and 10. You could also make your child start thinking again by trying a different combination of squares once he is used to the positions of the number squares.

Here are some examples:

The video above also shows some examples of different rules to play by that are more advanced.

Why not make an indoor Hopscotch mat out of number mats to keep in your child’s bedroom, that way he can play it regularly and master the game?

He will be getting lots of gross motor and cognitive stimulation by playing this game in his room.

Alternatively, use foam number mats and join them to make a court. Here’s an indoor hopscotch mat your kids will love.

Great idea. So much fun.

Hi Tanya, it looks really a very interesting. I am trying it out at our Sunday School this Sunday. Thanks very much for your work.

Hi Tanja! Thank you for sharing this game. Good ideas & also different ways to do it helps the younger ones. Keep sending ideas like this for younger children age 3.

Hi Saroj, I will do, thanks!