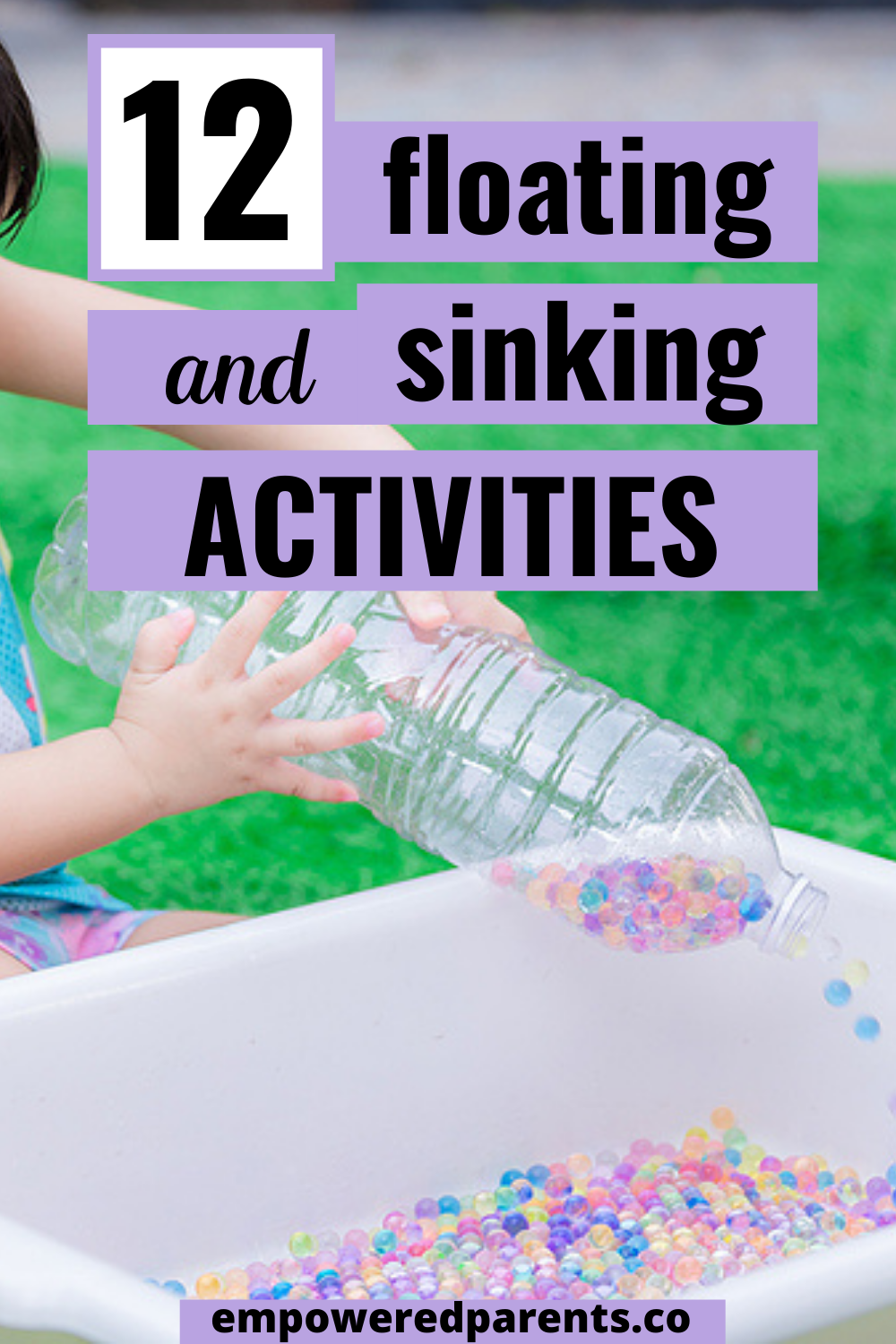 From the time they are babies, most children love playing in the water! Beyond fun, many lessons can be learned through water play.

Offer kids opportunities to build early science concepts by discovering which materials and objects float on water and which sink to the bottom.

Try these sink or float experiment ideas to teach your kids this fun concept.

How Do You Explain Floating or Sinking to a Child?

Young kids often understand the concept of objects being “heavy” or “light” and sometimes refer to those characteristics when they explain floating or sinking.

You can help them move even further to embrace the terms “density” and “molecules.”

These small particles that make up objects are packed more closely together and have more density in the things that sink.

Include a selection of these materials that float and sink for your activities:

Make use of any other materials you can think of.

Try the following fun sink or float activities with your children.

To dive into the topic through fiction, read or listen to What Floats in a Moat? by Lynne Berry.

The cute animal characters must cross a moat to make a delivery to the queen. Throughout the story, they try different strategies to see what makes their barrel float or sink.

Informational books are also very helpful for introducing this concept. Check out Things That Float and Things That Don’t by David A. Adler.

This picture book shows kids how to carry out their own experiments at home and discusses density as compared to weight.

3. Sing Songs About Things That Float

Songs about boats, such as “Row, Row, Row Your Boat,” fit well with the concept of floating.

You can also include music about creatures that float, such as Raffi’s version of “Octopus’ Garden.”

4. Play in the Water

Typical sink or float activities for toddlers are experiential. They play with various objects in the water and notice which ones float near the top while others sink down to the bottom.

They sometimes go looking for other objects to try in the water.

Floating and sinking experiments for preschoolers often include making predictions and conclusions.

For organization, make a grid sheet with pictures of the base objects chosen for the activity. Ask kids to mark next to each picture whether they think it will sink or float.

As each object is dropped in the water, they can then mark if their predictions came true, sorting the items by whether they sank or floated.

Afterwards, discuss why they think certain objects sank while others floated. Can they name any similarities in the materials? Can they find other things that act in the same way?

Place a toy boat in a water-filled container. Urge children to discover ways of sinking the boat. They can add items to the boat for weight or even tip the boat until it fills with water.

Challenge kids to decide why a boat sinks when tipped over. You can help them understand that the air inside helps the boat float and is replaced by water when it tips, making it sink.

Offer materials like aluminium foil or waterproof clay that children can manipulate into various shapes like balls or boats before placing them into the water.

Experimentation shows that the shape does make a difference. This is due to “displacement,” or how the water is pushed aside by the various forms.

Provide non-coated paper plates on which children colour water on the bottom half.

Offer a controlled set of small items that each child tests in a bowl of water for sinking or floating. They sort them onto “sink” or “float” labelled paper towels to dry.

When they’re done testing them, children glue the items that sank during the experiment onto their plates near the bottom of the water, and the things that floated, they glue near the top.

String a length of wool through a punched hole at the top for hanging.

Offer a variety of recycled materials, along with string, wool, and masking tape.

Ask kids to build boats for floating in the water. When they try them out, allow for redesigns that could help them float more effectively.

Give each child a small paper bag. Go outdoors on a neighbourhood walk, to the park, or into the garden.

Challenge kids to hunt for and collect natural materials they find that can be used for sink or float experiments.

12. Observe Animals: What Helps Them Float?

Have children observe animals near water in the wild, at the zoo, or in a video. As they watch them interact with the water, ask the kids to determine what about the animal bodies helps them float and swim.

Bath time changes forever once kids become intrigued with the concept of sinking and floating. Be prepared to please them by adding more minutes to their time in the tub!

I'm Tanja McIlroy, a former early childhood teacher and creator of Empowered Parents. I write about child development and share lots of simple ideas and activities for parents and teachers of young children.